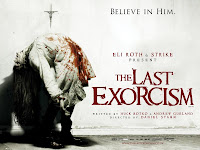 The Last Exorcism is rated PG-13 and was released nationwide in theatres on August 27, 2010. It was written by Huck Botko & Andrew Garland and directed by Daniel Stamm. The Last Exorcism stars Patrick Fabian, Ashley Bell and Louise Herthram.
Cotton Marcus, played by Fabian, was raised in the church by a 'fire and brimstone' preacher. At a very early age, Cotton began to follow in his father's footsteps and preach the gospel. At the tender age of ten, Cotton performed his first exorcism. Years later with a wife and son, Cotton has spent his life developing elaborate hoaxes and effects to keep the money rolling in for him and his family. Having lost his faith many years ago, Cotton has decided to end his career as a phony by bringing in a documentary crew and sharing all the insider tricks to performing exorcisms so that people believe, and then shell out the cash. When he and his camera crew show up at the home of Louis Sweetzer, a man who says he is suffering from cattle loss and unexplainable deaths of his farm animals; what they find is much more than any of them have bargained for.
The Last Exorcism is filmed in a documentary style much like The Blair Witch Project and will appeal to fans of this brand of movie. I laughed hysterically throughout the entire first half of the movie as Cotton Marcus takes the film crew through the tricks of the trade.
The characters in The Last Exorcism were wonderfully placed together and draw the viewer in with the realness and intensity of their lives. Patrick Fabian was fantastic as the money hungry, unbelieving but sympathetic preacher, Cotton Marcus. Ashley Bell's performance as the possessed Nell Sweetzer is shocking when you consider that no special effects were used for her part...NONE!
The movie did begin to slip about halfway through and was not at all what I would consider a 'scary' movie. I am quite sure that many will be disappointed with the film's ending as well.
I am giving The Last Exorcism a 3-spider rating and urging you to skip the big buck's you'll pay at the theatre and just wait it out until The Last Exorcism hits the video stores.
CK Webb
Posted by WebbWeaver at 8:46 AM 2 comments:

Arson by Estevan Vega was published by Tate Publishing in 2009. It is available for purchase at www.amazon.com
Arson Gable has a gift...or a curse. He can create fire. But he didn't want it and he can't turn it off. He has no family except for his grandmother who he both loves and hates. He is isolated and awkward and alone.
Until he meets Emery; the girl in the mask. Arson feels more normal around her than with anyone else. But his secret could turn her away as well and Arson must learn to live with his abilities and face his demons in order to keep her.
Arson is also a story about growing up, but not in the normal sense. It is about growing up with a terrible ability that could reach out and touch someone at any time, and not in a good way. It is a story about a boy who really wants to be normal and have a real life, but who must instead learn to keep his distance and control his power. It is also the story of a strange girl in a mask who will be the only saving grace in a young man's life, that has until now been full of disappointments and realizations.
Estevan Vega has written a study in how two strange people come together under strange circumstances, to try and have normal lives even though they are both out of the ordinary. Both have strange pasts and unhappy lives but together, they strive for normalcy and happiness.
Vega has written a monster with a heart and gives us a clear picture of a broken, young man trying to fit into a normal world.
I am giving Arson a 4-spider rating. It is a wonderful, powerful story that should not be missed.
DJ Weaver
Posted by WebbWeaver at 8:47 AM 2 comments:

Book Review for THE DARK PROVINCE: SON OF DUPRIN by William H. Johnson

The Dark Province: Son Of Duprin was written by William H. Johnson and published in 2010 by IUniverse. It is available for purchase at http://www.darkprovince.com/ .
Calvin Gooding and his twin sister Mari, have spent their lives sharing a very special bond and love for one another. Raised in the strictly religious Duprin, the twins have never been far from each other, in their lives or beliefs. When Mari is stricken with a deadly terminal illness, Calvin refuses to accept the fate of his beloved sister choosing instead, to travel to the forbidden Dark Province to seek the blessing and healing of the king.
Summoned by the sorceress Tjetta, Calvin must go against everything he has ever believed, risking family, shame and eternal damnation by his Goddess, in order to save Mari. What Calvin discovers is that the cannibals and heathens he believed he would find on his travel through Th Dark Province, are but men and women with strong religious beliefs of their own. Can Calvin put aside his learned prejudices and inhibitions in order to save the sister he loves so dearly, or will he be be swept away by the sins of this great nation?
The Dark Province: Son Of Duprin is a wonderfully written first novel. William H. Johnson enthralls the reader with a great and noble quest while dealing with the moral dilemmas that this young man must face. There is something for everyone in The Dark Province, sorceresses, dragons, kings and queens and even a few scenes loaded with some intense sexuality. I am giving The Dark Province a 4-spider rating and recommending it to any reader who enjoys a page turning, shocking and enlightening read.
And just as William H. Johnson's lead character Calvin states... "I will not offer the slightest notion of an apology for a single breath of life I lived and breathed in The Dark Province".
CK Webb
Posted by WebbWeaver at 6:45 PM 1 comment:

Two Chilling Stories And A Dream was written by Alan Yager and published in 2009 by Xlibris. It is available for purchase at http://www.amazon.com/ .
Citizen 100010011-0, The Hill's Dairy Float Boy and The Eerie Leery Nora Olturian are the titles of the short stories you will find within the pages of this creepy & quirky little book. Each story takes on you on a completely different journey and tickles your imagination with the turning of each page. From a future, where the government controls everything, to the nutty neighbor we should all watch out for, Two Chilling Stories And A Dream has a little something for every short story lover.
The book pulls you along until the last page and leaves you wanting more, more, more. Two Chilling Stories And A Dream was a bit short for my taste at only 66 pages but it did give a wonderful glimpse into the mind and style of the writer. I will definitely be following this author's career and be eager for his next short story installment. I am giving Two Chilling Stories And A Dream a 4-spider rating and recommending it to everyone who loves the pull and allure that goes along with a wonderful book of short stories.
CK Webb
Posted by WebbWeaver at 6:38 PM No comments: