Book Review for 'Thunder and Blood' by Stacey Voss

Thunder and Blood, the first novel by author Stacey Voss was published in May, 2009 by Donner Publishing and it is a fantasy fiction with a different twist.
When Sarah Ingram discovers that her husband has been unfaithful, she immediately runs to the comfort of her sister Christine. The two women decide that a weekend trip to a lavish spa is just the ticket to help Sarah perk up, but as the ladies travel to their destination, they encounter a strange fog that forces them into a very different world from the one they have known. Although the country side looks the same, many things are different. The two women are separated by circumstances they cannot control and this forces both women to deal with their new surroundings in different ways.
Sarah meets Hillard, a gentle man who helps her and whom she is drawn to but who she is not really sure she can trust. Christine finds herself a prisoner of Lord Radek, ruler of Donner and surrounding lands. She does not trust him but when he is close, she feels an overwhelming sense of euphoria.
The two women must figure out what strange power has brought them to this new place, how they will deal with their lives from this point forward and how they will survive the inhabitants they encounter in this parallel land.
Stacey Voss has brought a new twist to an age-old story of beings who are no longer human but undead vampires, living in a world that is the same, but different in so many ways. She shows us a new breed of monster that is kind and caring, while also introducing us to the same blood-thirsty beasts we have feared for generations. Her writing is imaginative and descriptive and she blends new and old in a delightful way to captivate us with this new vampire story.
I thoroughly enjoyed reading Thunder and Blood and have recommended it to my book club members. We are all looking forward to Stacey's next book, Thunder and Ice. I gave Thunder and Blood a 3-spider rating. Good job Stacey!
DJ Weaver
Posted by WebbWeaver at 3:52 PM 3 comments:

Music Review for Even Heroes - To Be Continued... 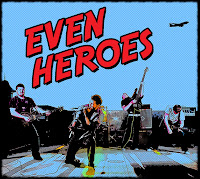 The as-yet signed band Even Heroes consists of Nathan Schroyer (vocals), Bruce Curtis (guitar), Billy Law (bass), Matt Chapko (drums) and Thomas Doss (guitar/vocals). The band hails from Fort Smith/Fayetteville, Arkansas.
I stumbled across Even Heroes on MySpace and was very excited when their EP hit iTunes with an album title that simply states To Be Continued. These guys have a sound reminiscent of bands such as Chevelle, A Perfect Circle, Breaking Benjamin and Seether, yet they maintain a style and sound that is original and belongs to them alone. Even Heroes' sound is mainstream Rock that focuses on heavy hitting chords, powerful lyrics, amazing harmony and a unity of sound that flows from each and every member of the band.
With songs ranging in genre from rock to alternative Even Heroes is fast becoming one of my favorite bands and offers a sound everyone can appreciate. If you are looking for the mellower side, then songs like 'The In Between', 'Today is Sunday' and 'Cherish the Rain' are your solution. Searching for something a little harder with powerful bass and alternative feel; then the songs 'Make Me Burn', 'The Highway' and 'The Stand' are what you're looking for. Imagine my shock at discovering Even Heroes is unsigned! If these guys don't get a record deal then there truly is no justice in the world.
I have thrown Even Heroes name out to everyone I know and have done so with confidence. Even Heroes is phenomenal! I cannot find a single song that I don't love, so I am going to do something I have NEVER done with any band. I am going to give Even Heroes a 5-spider rating! I am very anxious to see more from this talented group of guys.
CK Webb
Posted by WebbWeaver at 8:16 PM No comments:

Email ThisBlogThis!Share to TwitterShare to FacebookShare to Pinterest
Labels: alternative, Even Heroes, rock, To Be Continued

The Murder of King Tut is a non-fiction thriller written by James Patterson & Martin Dugard and published by Little, Brown and Company in 2009. It is the story of an extraordinary quest to discover exactly what happened to the boy-king.
This book was written from three different perspectives. Patterson and Dugard performed extensive research combing through tons of evidence and data to link details of the young ruler's life with the hopes of determining whether his death was an accident or something else. Dugard spent many weeks in Egypt, researching first-hand the life and death of Tut in hopes of uncovering information that could be used in determining his actual fate.
They studied the journals of Howard Carter, the Egyptologist who discovered Tut's tomb, and they chronicled the story of the find as Carter perceived it, from the time he was just starting out in his work, until after the tomb of Tut was finally discovered.
Patterson and Dugard also told the historical story of the boy-king from his beginnings as the illegitimate son of Amenhotep the Magnificent, to his life while being raised by Queen Nefertiti after his father's death. Tut and his step-mother ruled Egypt together until Tut took his half-sister, Ankhesenpaaten, as his wife in order to ascend to King.
These three tales are interwoven in a manner that permits the reader to see how life in Tut's time was lived, with all it's royal splendor, along with its mystery, deceit and betrayal. We also learn how and why Howard Carter spent so many years looking for the mysterious tomb of the ancient ruler. We see the evidence that lead many in Carter's time, to believe that Tut died of an infected broken leg. But Patterson and Dugard also show us the newer evidence that has lead many to believe now, that Tut may have fallen at the hands of a murderer who coveted his power.
The Murder of King Tut is a powerful and interesting read. Patterson took a step in a different direction with this one and the outcome will leave you wondering what fate actually befell the young King Tutankhamen. I would recommend this book to anyone who is seeking knowledge of ancient Egypt, or to anyone who just likes a excellent, fast-paced mystery. I am giving The Murder of King Tut a 4-spider rating and I hope you will pick it up and enter the mysterious and unknown world of the Valley of the Kings.
DJ Weaver
Posted by WebbWeaver at 10:07 AM 1 comment:

Lies and Illusions was released on DVD on September 29, 2009, and was directed by Tibor Takacs. The movie stars Christian Slater as Wes Wilson, Cuba Gooding Jr. as Isaac, Sara Ann Schultz as Samantha and Christina Campbell as Nicole.
Wes Wilson is a first-time novelist who's book, 'How To Find Love In The 21st Century', is topping all the best seller lists. Wes is also engaged to be married to the girl of his dreams. Everything seems perfect in Wes' life until his fiance' is kidnapped and presumed dead. Soon Wes meets Isaac, played by Gooding Jr., who claims that Wes' fiance', Samantha stole 10 million dollars worth of diamonds from him and guess what? He wants them back! Now Wes is faced with the harsh reality that everything Samatha had ever told him was a lie.
Let me just stop right here so you won't get the impression that this is actually a good movie. It was almost painful for me to watch Lies And Illusions because I am such a huge fan of Slater and Gooding. The acting is below B-flick and the camera angles are reminiscent of home movies shot by a shaky mom. Toss in the ultra-cheesy special affects and what's left over is Lies And Illusions. If you find yourself at the video store standing in front of this movie, please walk away quickly! If you will not heed my advice, you would be better off by simply walking in the store, handing the kid behind the counter $3 and walking out empty handed. I am only giving Lies And Illusions a 1-spider rating. Half a spider for Christian Slater and half for Cuba Gooding Jr. And trust me when I tell you...I am being generous!
CK Webb
Posted by WebbWeaver at 9:05 AM 1 comment:

Book Review for 'Stop Me' by Richard Jay Parker

Richard Jay Parker was born in South Wales but later moved to London, where he was a successful TV scriptwriter, script editor and producer. He now resides in Salisbury, England.
Stop Me was published by Allison & Busby Limited and is available for purchase on bookdepositiory.co.uk or at amazon.co.uk
"howdy doody,
on vacation
slim, attractive dreadlocked babe with a fun sticky-out belly button, likes rabbit fur
forward this e-mail to ten friends
each of those friends must forward it to ten friends
maybe one of those friends of friends will be one of my friends
if this e-mail ends up in my inbox within one week I wont slit the bitches throat
can you afford not to send this to ten friends?
vk"
Strangely written and punctuated, this email begins Richard Jay Parker's novel Stop Me and instantly you are intrigued and drawn in. A killer is sending out cryptic e-mails and at first no one takes them seriously, until the boiled jawbone of Cody Solomon arrives wrapped in a rabbit skin scarf to the Wyoming Police Department. Leo Sharpe receives a similar e-mail but dismisses it as a hoax. Leo later learns the description of the latest victim matches that which was given in the e-mail he received but discarded. Leo wonders if he could have stopped this from happening and is plagued with guilt.
When Leo's wife Laura disappears from a restaurant, police are certain that she has become another in a along line of victims of The Vacation Killer. Months go by with no jawbone and no leads as to Laura's whereabouts but Leo still holds onto hope.
Through fate and perseverance Leo meets Bookwalter, the man who claims responsibility for Laura's disappearance and Leo is quickly drawn into his web. But nothing in Stop Me is what it seems and Leo's fifteen-month journey to find his wife, takes many strange turns.
I was quite fond of the way Parker wrote his lead character Leo. "If the key goes in smoothly, I will see Laura again!" was just one of the many child-like ways, Leo would barter with the universe for his wife's return. The storyline for the book is fantastic and will make you cringe any time you receive an e-mail from a stranger asking you to forward to ten friends...Can you really afford not to?
I recommend this book to anyone who loves a good thriller and doesn't mind a great, big dose of shock at the end of a good read. Richard Jay Parker's originality will give you the creeps and will keep you guessing til the very end. I give Stop Me a 4 spider rating and hope you enjoy this page turner.
CK Webb
Posted by WebbWeaver at 10:59 AM No comments: