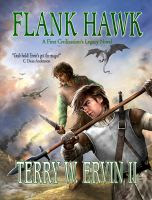 Flank Hawk was written by Terry W. Ervin, II and published by Gryphonwood Press in July, 2009. It may be purchased at http://www.amazon.com/.
Krish is a farm boy who joins with cousins and friends against an Evil that is trying to take over their land, the only home he has ever known. The Necromancer King has resurrected Nazi war technologies almost three thousand years after the fall of civilization as we know it. This technology presents great challenges for Krish and his new friends and allies in this war of mythical proportions. Krish quickly becomes a mercenary fighter and proves his worth as a determined warrior as he defends the Prince and King he has pledged allegiance to.
This story is filled with fantastic creatures from all manner of fictional lore and then brings them all into one riveting tale of bravery and coming of age, testing the reader's imagination. Mr. Ervin involves the reader in Krish's tale and makes them earnestly want him to succeed. The story is unique and never boring. Twists and turns throughout the book kept me entertained and wondering what was coming next. I am giving Flank Hawk a 3 spider rating and hoping that Mr. Ervin decides to extend Krish's tale.
SB Price
Posted by WebbWeaver at 9:17 AM

It really does sound great!

Thank you for the review, Ms. Price!

Carole Ann and CK, Flank Hawk is both fascinating *and* great, but as the author, I'm probabably a bit biased. ;)

During some searching, I came across this blog and read the entry and found it fascinating how others write reviews. Some reviews seem to be very generic while others have actually read the story and enjoyed it.
I've also come across some stories that are generic, but not Flank Hawk. I especially liked the characters and how they grew, even some of the supporting characters. For me, that shows a lot of thought going into the story. Nice job!

Nice review. I have read this book and I loved it.

I once thought I would never read a book "about" zombies. When the first chapter introduced Krish and zombies I was sruprised that I found the story interesting. The author managed to write such compelling sharacters that I quickly invested in their lives and wanted to see what happened to them. Terry Ervin's well-developed characters and Krish's intriguing journey created such a compelling story that I bought copies for each of my adult children and my grandsons. I highly recommend Flank Hawk to anyone who enjoys fast-paced adventure with constantly growing challenges. It transcends genres.

Sandy, Angie and D.S., thanks for reading the review and also for reading Flank Hawk. Very glad you all enjoyed it!

The author did a brilliant job writing this debut novel. There's never a dull moment as we follow Krish, a farmhand turned mercenary, as he forges through battles. Dragons, zombies, giants, and wizards color the pages of this science fiction, fantasy novel.

Cher Green,
Thank you for the compliment on Flank Hawk!