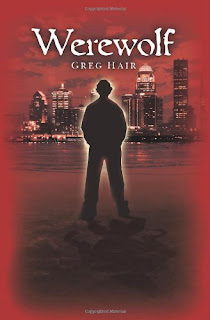 Werewolf was written by Greg Hair and published through CreateSpace in April, 2011. You may purchase it at www.amazon.com and you may find out more about Greg at http://greghair.blogspot.com/p/landon-cillian-murphy-werewolf.html

Landon Murphy is a vigilante Werewolf who has been using his natural instincts and ability for tracking, as well as his supernatural instincts for killing to remove the worst of the worst from society. Landon has been a sort of ladies man in the past, but now is a loner.

Landon has found two new werewolves in his area. He wonders how there could be two so new this close, but he endeavors to find and help them. In an effort to teach them about their new powers and their lineage, he takes them to Europe to learn about themselves.

Meanwhile, back in the US, there is a serial killer racking up victims. This killer is traveling all over the US, and the authorities can’t seem to get a fix on an identity. It will take the skill of Landon and his team to track this killer and bring him to justice. In the process, however, Landon will learn more about the new werewolves, and about himself. The secrets he finds will change his life forever.

This book was a very fast read for me. The storyline was never boring. This book was exactly what I like in a supernatural story. It had vampires and werewolves, a little love, a lot of action, and some twists to surprise the reader. I would love to read more about Landon, LillyAnna and Jamie. This was very entertaining, and I would recommend it to anyone who loves a good supernatural story.

Posted by WebbWeaver at 9:00 AM No comments:

Book Review for VANISHED IN THE NIGHT by Eileen Carr

Vanished In The Night was written by Eileen Carr and published by Pocket Books in July, 2011. You may purchase this book at http://www.amazon.com/ and you may read more about Ms. Carr on her Goodread’s page at www.goodreads.com

Old bones turn up at a large construction site in Sacramento, sending Detective Zach McKnight and his partner on a cold-case hunt for a murderer. When the ME identifies the bones as those of one, Max Sheldon, his step-sister Veronica Osborne is paid a visit and given the news that the brother she loved and hoped would return, has been dead for nearly twenty years.

When McKnight discovers that Max’s step-father is the reason Max was sent to a reform school so many years ago, and that the school had reported the boy missing not long after he arrived, McKnight begins to suspect that the lovely Veronica’s father may possibly be the reason her step-brother has been dead for so many years. But, when Veronica realizes that the detective suspects her father of the crime, she begins an investigation of her own to prove her alcoholic father was not the culprit.

Twist and turns, mutilated bodies and bazar occurrences punctuate this novel by Eileen Carr and propel her into a top spot as an up-and-comer on the ‘Masters of the Thriller’ list. The characters are true-to-life, the attractions are right on target and the suspense is gripping in this great keep-you-up-all-night read. Murder, love, trust and betrayal…what else could you ask from a suspense novel?

5 Spiders for Vanished in the Night and Eileen Carr. 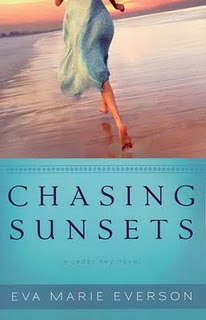 Chasing Sunsets was written by Eva Marie Everson and published by Revell in 2011. You may purchase this book at http://www.amazon.com/ and you may read more about the author at http://www.evamarieeverson.com/


Kimberly Tucker is living a life that she never expected. Her failed marriage has left her wondering what went wrong. Her ex-husband seems to be living it up while she tries to keep her two sons close. So when a Family Court judge decides her children should spend five weeks of their summer vacation with their dad, Kimberly is at loose ends.

Then, Kim’s father asks her to go to the family summer home in Cedar Key, to spend a few weeks finding someone to keep the place up since the previous caretaker has died. It is a place she always loved until her mother died and a place she has not been to since. Kim balks at the idea of spending time in Cedar Key even though it was where she was happiest and where she found her first love. She will soon find that life is always changing and that second chances really can happen for the best.

Chasing Sunsets is not only a life story, but also a fabulous love story. It is told in first-person so the reader gets a great feel for exactly how Kim is processing everything that is happening in her life. The characters are well done and make the reader feel as if they could easily be someone they knew in their own life. The story is sweet and the reader will cheer for Kim as she moves to change the parts of her life that can never work and become the person she always thought she was—all while coming to grips with the reality of her mother’s life and death.

Ms. Everson has written a great story that will take you back to your youth and make you wish for second chances—Chasing Sunsets is a fabulous read and will truly touch your heart.

Blood & Water was written and published by Ephraim Rodriguez. You may purchase the book at http://www.amazon.com/


Henry Michael Fischer is a lobster fisherman who wants nothing, but to carry on the family tradition. He learned to fish with his father, beginning when he was just a boy. His family has lived in the same house and fished on the same boat for generations. Now it is his turn.


Throughout various stages of his life, Michael is haunted by his father. Michael watched his father die on the fishing boat. Since that day, Michael had to be the male figure for the Fischer home. He had to take on the role of the protector. Follow Michael as he grows into a man, gaining a family of his own, and learning who he is. Michael sees his father, and feels his presence, at various stages of his life. Is this to guide him or haunt him? Is Michael living the life he is supposed to live?


Blood & Water is an interesting story of the life of this man. This book tells how a boy, and later the man he becomes, is haunted by his father. In his dreams, and seemingly in his waking life, his father returns to send messages. Some of his messages are reminders, and some are just scary.


This was a simple read and an interesting story and I’m giving it a 3 spider rating.

Posted by WebbWeaver at 10:22 AM No comments:

Book Review of 'Beneath the Dune' by Walter Ramsay

Beneath the Dune is a novel by Walter Ramsay, published by Pena Beach Press in 2011. It may be purchased at www.amazon.com and you may read more about Walter at http://www.walterramsay.com

Tucker Lee Anderson is a reporter who is sent on his first crime case by his boss and he wants Anderson to check out a story over on the beach side. Anderson is normally a sports writer but as a favor to his boss and his co-worker who is sick, he agrees to check it out. The case turns out to be a follow-up to another case in which a serial killer murdered several children and this body might be the last of his kills.

But as Anderson investigates, the evidence leads him to do some ancestral research, and he soon discovers family ties that bind him. What he uncovers will shake up the area residents and connect him to the past and the present.

This novel was a great read—filled with mystery, humor, and suspense—it will keep you on the edge of your seat wondering what could happen next. An intriguing and suspenseful debut novel from Mr. Ramsey.

I’m giving this book a 4 spider rating and recommending it to anyone who enjoys a suspenseful read.

Posted by WebbWeaver at 12:31 PM No comments: