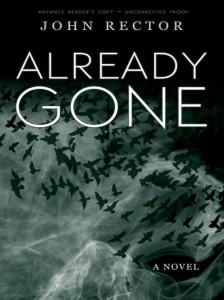 Already Gone was written by John Rector and published through Thomas & Mercer in October, 2011 and may be purchased at http://www.amazon.com/  You may read more about John at http://johnrector.blogspot.com/

Walking into a restaurant parking lot to get his car and having two thugs jump him and cut off his ring finger is not Jake Reese’s idea of a good night. Having his quiet life escalate out of control and his wife disappear is not his idea of fun either…but then, what could a former bad guy expect to come from his not-so-distant past. What do these people want from him and why are they doing this? Questions Jake needs to find the answers to and he’ll do whatever it takes to find them. Even if it means going to the one man who can help—a former mob boss and murderer who Jake has known all his life and worked with for part of it.

Jake Reese’s life will never be the same and the reader will get a suspenseful look at how things are done on the wrong side of the law. This novel will leave you breathless and have you speed-reading to the twisting end. Another great read from John Rector, who really knows how to pour on the intensity and leave his readers with a smile on their faces.

Rector has written a fast-moving, thriller that will take you on a trip through the life of a man who, in his youth, became a mob associate, inflicting pain and suffering, only to give it all up for a quiet life. Now his past has come back to haunt him and he’s paying a big price.

I’m giving Already Gone and John Rector, 4 spiders for this fast-paced, action novel and recommending it to all thriller readers.

This sounds like an interesting book- and it starts of with a bang. Ouch! The storyline is intriguing and I like that it is fast paced. Thanks for sharing!