Book Review of THE POWER OF STONES by John A. Miller 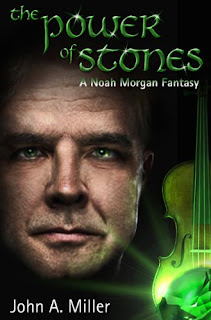 The Power of Stones was written by John A. Miller and published in 2011. You may purchase it at www.amazon.com You can visit the author here: http://jmillerarts.com/

Noah Morgan is an ex-con who acquires work as a unlicensed private investigator for a San Francisco insurance company. He is hired to search for a priceless ancient violin but there are others who are searching for him- believing that he possesses a trove of jewels, which includes an extremely valuable 40 carat green diamond. A group of unsavory urban characters are on the hunt for Noah and the precious jewels but Noah soon realizes that he has more to worry about. A strange aged gypsy woman ushers in a spirit world populated by demons, vampires and a romantically affectionate faerie who are also interested in what Noah might possess. In his quest to find the violin he encounters situations and entities that threaten his life- but he also learns that he also has powers that he will need to develop to keep himself alive.

Author John Miller creates this urban fantasy tale and manages to pull us into a story line which is both complicated and absorbing at the same time. It took a while for me to finally get a sense of where the story wanted to go but eventually I found the characters interesting enough that they actually helped to pull the story together. The author added a bit of a surprise near the end that was both interesting and thought provoking- an intelligent insight into how we see others in our community; especially the poor and the downtrodden.

This is a worthwhile read if you're looking for an escape into a world which melds fantasy together with real life. It's an adventure quest for material treasures as well as the riches that we can find within ourselves.

I give The Power of Stones 4 spiders.

Posted by WebbWeaver at 9:31 AM