Book Review of PRINCE OF THORNS by Mark Lawrence 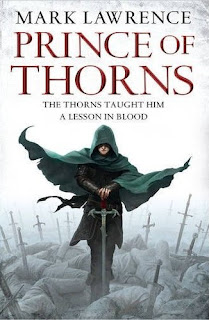 Prince of Thorns–Book One of the Broken Empire was written by Mark Lawrence and published by Ace Hardcover in August of 2011. You may purchase this book at http://www.amazon.com/  and you may read more about Mark Lawrence at
http://princeofthorns.com/authorrbio.html

Seeing his mother and brother slain before his eyes, has left Jorg Ancrath changed into something of a monster, who leads a horde of bandits in murdering and pillaging the countryside. He has sworn to take back the kingdom which is rightfully his, but in order to do so, he must return to his father’s castle and face some very dark magic.

In this first book of dark fantasy in his Broken Empire series, Lawrence sets a stage in a new era of sorcery and magic that is climbing out from the destruction of modern society. The protagonist is both vicious and unforgiving, while still being believable, quick-witted, and at times, humorous. While kings compete for control of a kingdom, magicians and necromancers work from behind the scenes to gain dominance, and Jorg must attempt to defeat them all.

This highly praised fantasy will leave you breathless with anticipation of what the next page will bring, while making you wonder how high the body count will rise as Jorg and his men slice and stab their way through the story. Lawrence has a way with character and story development that will have you anticipating the second book in this fabulous series. Praise to Mark Lawrence and Prince of Thorns–Book One of the Broken Empire series.

I’m giving Prince of Thorns a 4 spider rating and recommending this fantasy read to any who love a tale of kingdoms, magic and mayhem.