Book Review of THE SAVIOR VACCINE by Michael Rushnak 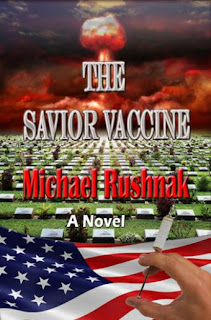 President Jane Williams is facing the fall-out of public opinion after a string of terrorist attacks are perpetrated inside the United States borders, the latest being a nuclear blast in Minneapolis. Thousands are dying from radiation-induced cancers with millions more to follow. Just as the President declares an all-out war to prevent all forms of cancer secondary to radiation fall-out, the CEO of Doctor’s Choice Products claims his company has developed a vaccine that will prevent these cancers and save the population, but it has only been tested on monkeys and needs human trials.

Surgeon General, Dr. Jonathan Rogers, while testing the new drug, NeoBloc, discovers that the drug may not be the ‘savior vaccine’ it is touted to be. As attacks continue, the government must decide if inoculation of everyone in America is safe or if it could be disastrous.

Twists and turns abound in this second novel of the Health Club Mysteries by Michael Rushnak, with our old friend, Dr. Jonathan Rogers back to lead the way through this break-neck page turner. Murder, terrorists and world holocaust are just a few of the intrigues brought to light in this story and it’s a race to the terrifying finish. Rushnak has done it again and you won’t want to miss this horrifyingly true-to-life novel by this medical thriller writer.

5 spiders for The Savior Vaccine.

Posted by WebbWeaver at 1:41 PM

Sounds like a great book! Thanks for the review! :)