Book Review of WRITERS ON THE WRONG SIDE OF THE ROAD, Edited by CC Bye and Sassy Britt 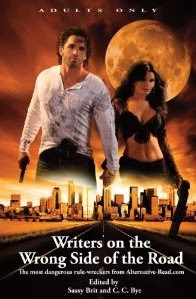 Writers on the Wrong Side of the Road is an anthology edited by Clayton Bye and Sassy Britt and published through Chase Enterprises Publishing. It may be purchased at http://www.alternative-read.com/


This adult-based alternative anthology contains eighteen short stories written by fourteen  writers. Each story was very different and a few were very adult with some sexual content. But, for the most part, the book offered some good short stories ranging from thrillers to science fiction each with awesome ‘shock’ value.


I really enjoyed each story and can’t decide which was better. I got started reading and really couldn't stop—wanting to read more or continue on to the next hair-raising story. I like a book I can pick up and not put down and was really surprised how much this read kept me coming back for more. Writers on the Wrong Side of the Road certainly did it for me. From the umber-creepy to the tragically bittersweet, this anthology has it all.


A few of the stories represented in this anthology are; "The Barefoot Hero" by Timothy Fleming, "The Cenotaph" by Casey Wolf, "Take Two" by Kit St. Germain, "The Journey" by Megan Johns, "The Smile in Her Eyes" by John B Rosenman, and "Man Slaughter" by Lucille P. Robinson. These are just a few of the great shorts in this read.


I’m giving Writers on the Wrong Side of the Road a 4½ spider rating and recommending this anthology to any adult reader looking for something different. You can’t go wrong!

Book Review of A TIME TO LIE by D.W. Hardin

A Time to Lie was written by D.W Hardin and self-published in January 2012. It is available for purchase at www.amazon.com You can learn more about this author by visiting his website at http://www.dwhardin.com

John Drake has it all, a loving family, a nice home and a job as a police officer that he loves until, his world comes crashing down around him. While working with a fellow officer on an off duty security job, a deadly shooting spirals out of control, leaving two dead, including fellow officer Frank Glass. Nothing adds up about the shooting, but all clues point to John Drake as the shooter. Stripped of his badge and branded a ‘cop killer’, John is faced with the difficult task of trying to find out the truth behind the shootings, clearing his name and staying alive in the process… a task that is easier said than done.

A Time to Lie is D.W. Hardin’s second novel and I have read them both. This book had a much different feel from his first book, as it is written in first person from Officer John Drake’s point of view. Hardin does a fantastic job of bringing the real, heartfelt emotions to life and his characters jump from the pages because of it. As a reader, I felt all of the main character’s turmoil and pain and I was rooting for him every step of the way. For those of us not in the law enforcement field, A Time to Lie shines a bright light on every aspect of the profession and those who choose it. There is a little something for everyone; action, conspiracy, corruption and even honor. Hardin has a style of writing that feels so natural and real, I found myself saying… “This could really happen!”

A 5-spider novel from an outstanding writer… it doesn’t get much better than A Time to Lie.

Book Review of D.N.A. - Nothing Would Ever Be The Same by Ey Wade 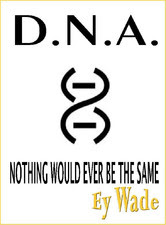 D.N.A. -Nothing Would Ever be the Same was written by Ey Wade and published by Wade-In Publishing in 2011. It is available for purchase at www.amazon.com and you may read more about the author at http://wade-inpublishing.blogspot.com/

Debney’s life up to this point has been uniquely sad. Raised by a mother who showed no affection and a father who couldn’t seem to relate, Debney could have been a problem child, but managed to do things right and becomes valedictorian of her class. Then, on the night of her eighteenth birthday, while having a party at her home, Debney finds out that her entire family has died in a car accident. Although the details are sketchy, Debney’s grief leads her to a wrong decision, which leaves her, not only alone in the world, but pregnant as well.


What Debney does next, and how she handles her life from this point is what Ey Wade’s novel is truly about. The situations and emotional responses are heart-warming and the story is sweet and well-written. D.N.A. is a truly poignant story that will have you shedding a tear and cheering for joy.


I’m giving D.N.A.-Nothing Would Ever be the Same, a 4 spider rating and recommending it to anyone who loves a ‘winning’ story!

Posted by WebbWeaver at 11:58 AM No comments:

Book Review of 'eye of the god' by Ariel Allison 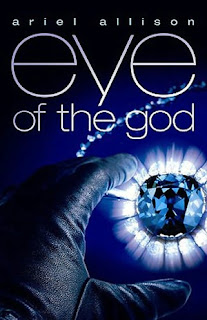 eye of the god (and the author uses lower case for the title) is built around a plot to steal the famous Hope Diamond from its home at Washington’s Smithsonian Institution. Abby Mitchell, responsible for a gala event centered around the diamond, is the central figure in a mystery that starts slowly and builds to a thundering crescendo.

As the author weaves the tale, she provides a great deal of history concerning the diamond and the alleged curse that travels with it, taking the reader back to its earliest known appearance in India. Among those who suffered while owning the diamond were Marie Antoinette and Washington socialite Evalyn Walsh McLean.

I feel that the author did a fine job in building the intrigue necessary to enthrall the reader and I give the eye of the god 4 1/2 Spiders. 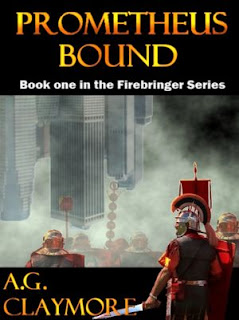 Prometheus Bound was written by A. G. Claymore and published in 2011. You may purchase it at http://www.amazon.com/  and you can visit the author at http://agclaymore.blogspot.com/

The year is 9 AD and Quintus Druronius, a young tribune, has managed to survive an attack that led to a massacre of his people. He soon learns that secret information which he had acquired from his past, that he thought was fictitious tales told by a family member, was in fact real, and may have led to the mass slaughter because he was in possession of it.

Jumping ahead to the last years of World War Two, fighter pilot Rolf Patzer and an SS officer embark on a mysterious mission involving the moving of a number of small crates out of Germany before the arrival of the Allied Powers.

Meanwhile, in present modern times, Jos F'al, a former intelligence officer, learns that Emily, his fiancée, has been abducted while on an archeological dig which ended in the murder of several of her colleagues. While Jos begins his search for Emily, he stumbles upon an artifact that reveals that human history is much older than anyone ever suspected. In fact, the device pre-dates human civilization and he learns that the end of history, as we know it, is at hand.

Prometheus Bound hopscotches us through three historical eras and proceeds to delve into the lives and adventures of three interesting characters who are each enriched by their perspective time periods. A. G. Claymore makes the story a bit difficult and confusing to follow in the beginning as I was left wondering if the three historically separated story lines were ever going to intersect. But through the use of a time travel plot he cleverly pulls the story together and it doesn't take long before it all begins to make sense.

The ending satisfies and promises more adventures in the upcoming sequel.

I give Prometheus Bound 4 Spiders. 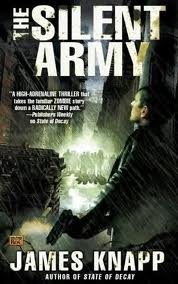