Book Review of THE DEVIL'S BAIT by Jeffrey J. Mariotte

The Devil’s Bait was written by Jeffrey J. Mariotte and published in 2011. It may be purchased at www.amazon.com and you can visit the author at http://jeffmariotte.com/main.htm

Jessica Cutler is a “Relationship Manager” with MetroBank on the way up when she watches her most important client, Richard Steele, and another man murder four others in a garage (it started off as self-defense but Steele went to each wounded man and shot them through the head). Unseen by Steele, Jessica flees the scene, and begins to question whether the transactions she has been making for Steele have in fact been money laundering.

After a sleepless night, Jessica brings her suspicions to a higher-up at the bank, a friend who has been her mentor. He listens to her story— she does not mention the murders— and assures her that, while there is probably nothing to her fears, he will look into her concerns. Jessica leaves the office relieved until someone tries to push her in front of a subway train. When she finally returns home, she finds that her apartment has been riffled. She throws some clothes into a bag and “goes on the run.”

Narrowly escaping danger, she makes her way across the country to Clark’s Grove, Iowa to take refuge with her long estranged sister, Joan. Once there and realizing that Steele’s people would continue to search for her no matter how far she ran, she decides to seek protection and hires Morgan Byrd, an ex-Special Forces mercenary as a bodyguard.

Once she explains the situation to Byrd, he convinces her that the best way to protect herself and those close to her would be to go on the offensive and this offensive takes them from Iowa to Paris to Geneva to the Grand Caymans, back to Iowa, and then back to New York City where it all started.

The action is fast-paced with many twists and turns and Mariotte has obviously done much research on the intricacies of banking transactions.

Posted by WebbWeaver at 10:33 AM No comments:

Blog Tour Stop for Kara Lennex and OUTSIDE THE LAW 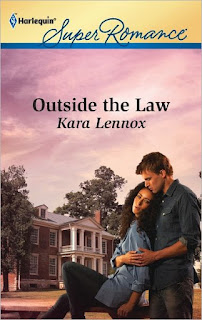 Mitch Delacroix is everything Beth McClelland likes in a man. Smart, good-looking and so very safe. She's this close to making her intentions known.
Then Mitch is accused of murdering his best friend years ago. Suddenly his rebel past—including the criminal record—is revealed to everyone.
But something doesn't fit—the Mitch she knows couldn't possibly kill anyone. She's determined to find the truth. As a forensics expert, she's used to uncovering people's secrets. Yet she never expected Mitch could be hiding so many. Despite rising doubts, she'll help clear his name. Even if what she discovers could threaten their relationship…and their lives.
Here is an excerpt: 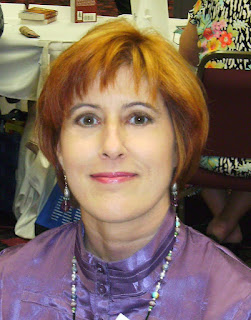 Kara Lennox, a.k.a. Karen Leabo, is the award-winning, bestselling author of more than sixty novels of romance and romantic suspense for Harlequin and Random House. Currently she is working on the next installment of her romantic suspense series, Project Justice, published by Harlequin Super Romance. Also, several of her classic Bantam Loveswept novels (writing as Karen Leabo) are soon to be re-released in e-book form by Random House. Her novels have finaled in several contests including the Rita, the Reader’s Choice award and the Holt Medallion. Romantic Times awarded her a Reviewers Choice Award.

Prior to writing romance, Karen was a freelance writer with hundreds of magazine articles published, as well as brochures, press releases, advertisements and business plans. Her former clients include Working Woman Magazine, Hallmark Cards and Marion Merrill Dow.

Karen has written ten screenplays, three of which have been optioned by Hollywood, New York and overseas producers. She lives with her writer/publisher husband and several pets in a shabby-chic (heavy on the shabby) Victorian fixer-upper in Southern California. When not writing or sanding floors, she loves bicycling, bird-watching, hunting for flea-market treasures, painting and making mosaics.
Thanks to Kara for letting WebbWeaver Reviews participate in her fabulous Blog Tour!
Posted by WebbWeaver at 8:39 AM No comments:

Book Review of IN THE BLEAK MIDWINTER by M.R. Sellars 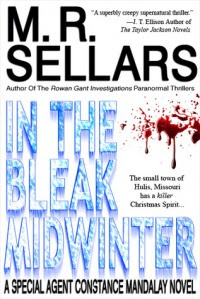 In The Bleak Midwinter was written by M.R. Sellars and published by WillowTree Press, L.L.C., in November, 2011. You may purchase this novel at www.smashwords.com
and you may read more about M.R. Sellars at
www.goodreads.com

The small, Midwest town of Hulis, Missouri is in for another very cold winter and another very strange Christmas season, as Special Agent Constance Mandalay is assigned to solve a cold case murder that keeps repeating itself every Christmas Eve.

For the last seven years, the town of Hulis has been the scene of a horrific murder on Christmas Eve, but no one knows how or why it’s happening. Every year, Skip Carmichael, the town sheriff receives a blank Christmas card with no evidence he can use. Every year a dismembered body is found in a basement with no evidence as to the killer’s identity. The only thing that never changes is the yearly murder’s similarity to a murder that took place thirty-five years ago in Hulis, when a young girl was kidnapped and molested by the local department store’s hired ‘Santa’.

Now, Special Agent Mandalay must figure out how these crimes are happening, even though a long line of Special Agents have been sent each year to solve the murders, but none have.

M.R. Sellars has penned a superbly frightening story that will make the reader a little apprehensive about the joyous Holiday Season. His characters are true-to-life and the reader can feel the ‘creepy’ setting in from the very first page. That feeling builds to a hair-raising crescendo and the ending will leave you breathless and afraid to turn out the lights… for a long time.

In The Bleak Midwinter is a supernatural thriller with an edge and M.R. Sellars has earned a 5 spider rating from me. I will be looking forward to more from this fabulous author. 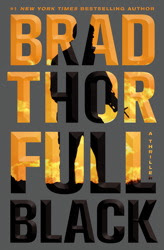 Full Black was written by Brad Thor and published by Atria Books in 2011. You may purchase this novel at www.amazon.com and you may find out more about Brad at http://www.bradthor.com/

The ultimate terrorist plot is on the move and it will bring down, not only the United States, but inevitably, every nation in the world. Where did this plot originate? Is the threat from the Middle East, the Western Republics or right here in the United State? This is the question Scot Harvath has to find out as he travels across the globe, hunting for the root of the largest take-over plot ever devised. He will have to put together the frightening clues and strange occurrences and figure out who is behind the most devastating plot ever devised.

New York Times bestselling author Brad Thor has written an intense novel of power gone mad. The scenario is so ominously realistic that the reader can feel every bit of the life-threatening urgency and pulse-pounding fear portrayed in the story. The players range from heads of state to prominent movie producers to Russian Special Forces and they all have a part in a deadly power move with the highest stakes ever.

This addition to Brad Thor’s ‘Scot Harvath’ series will put you in fear for your way of life and make you think about what’s really going on in the world, one terrifying page at a time. A fabulously intriguing tale from beginning to end and another absolute must-read for thriller fans. 5 spiders for this one… do not miss it!
DJ Weaver