Book Review of THE EMERALD SCEPTER by Paul Kemprecos 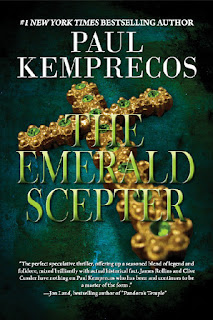 The Emerald Scepter was written by Paul Kemprecos and published through Suspense Publishing. You may purchase this book at www.amazon.com  or wherever eBooks are sold. You may learn more about the author on his web site at www.paulkemprecos.com

Back away Clive Cussler and James Rollins… Paul Kemprecos has penned a thrilling action/adventure that crosses all boundaries and drops the reader into the thick of it. The Emerald Scepter is everything action/adventure junkies demand and Kemprecos does it in a manner that places him squarely in line to take command of this ultra-entertaining genre.

Matt Hawkins is a physically and mentally wounded ex-SEAL, kicked out of the Navy and living a quiet life, until he is asked to return to Afghanistan to search for a treasure belonging to Prestor John, a legendary Christian ruler, and in particular, an emerald-encrusted cross thought to be Prestor’s power as a ruler. This cross is the link to a much darker scenario where thousands of people are killed in an attack to rival September 11th.

Matt’s team includes an old military friend, his ex-wife, and a computer whiz that is just a bit crazy. Together they travel thousands of miles and gleen historical and speculative information to find the treasure before it falls into the hands of murderers wanting power.

Great writing, cohesive characters, and more action and thrills than the reader can calculate make this novel flow to an impossible-to-put-down ending and I will be diligently checking out more works from Kemprecos.

5 spiders and well earned. If you are an action/adventure junkie like me, you cannot go wrong with The Emerald Scepter.

DJ Weaver
Posted by WebbWeaver at 9:50 PM No comments:

Book Review of AN INVITATION TO SIN by Sarah Morgan 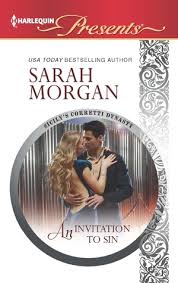 An Invitation To Sin was written by Sarah Morgan and is set for release, May 21, 2013 from Harlequin Books. You can pre-order a copy of the book at www.amazon.com
You can learn more about this author by visiting her website at www.sarahmorgan.com


Taylor Charmichael, a wild child movie star looking to restart her career, and Luca Coretti, one part of a family dynasty, find themselves in dire need of‘respectability’. Solution: a fake engagement. What could be easier? But putting these two under the same roof is explosive – in more ways than one!


Another fun read from the talented Sarah Morgan.


In this story, Sarah has created two very lovable characters, both holding onto pain from the past, both desperate to avoid closeness at any cost.
Taylor envies the way in which Luca lives his life – free and unfettered from people’s opinions. She longs to let go, to be the woman she really is. I loved reading how Luca slowly peeled away the layers to reveal the true Taylor. I loved reading how Taylor finally opened Luca’s eyes to the fact that love can be constructive instead of destructive.
The witty banter between hero and heroine had me laughing out loud more than a few times and the chemistry between them had me turning the pages to get to the happily ever after.
4 Spiders from me!
Jennie J for WebbWeaver Reviews
Posted by WebbWeaver at 11:13 AM No comments:

Book Review of THE BURNING AIR by Erin Kelly 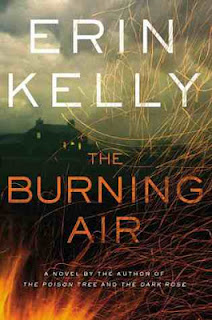 The Burning Air was written by Erin Kelly and published by Pamela Dorman Books in February, 2013. You may purchase the book at www.amazon.com and you may find more information about the author at http://www.erinkelly.co.uk


The MacBrides are the perfect family…or are they? Secrets cannot remain secrets forever and one seemingly insignificant lie told by the family matriarch, Lydia, takes the family down a path of destruction that could tear them apart forever, while destining one boy to a life filled with hatred and revenge.


This story, told from several different viewpoints, takes the reader through the intertwining lives of members of the MacBride family and a young boy named Darcy Kellaway. It begins in the present as Lydia writes her confession with all the intent of destroying it, but death claims her before she can. The reader is introduced to the members of the MacBride family and is given their backstories, each member having their individual trials and tribulations in life.


Then enters Darcy, whose story begins in 1996 with a devastating slight by the then-headmaster of Saxby Cathedral School, Rowan MacBride, the patriarch of the family. Darcy is rejected by the headmaster for a spot at the prestigious school, and the boy and his mentally unstable mother are devastated.


Darcy begins to plot his revenge on the family, which includes a beating administered to Felix MacBride that claims one of his eyes. His life becomes a series of events that include lies, deception, abduction, and murder—all of which Darcy feels the MacBrides deserve for Lydia’s part in his life’s downfall.


Twists and turns and nothing is what it seems in the culminating chapters and Erin Kelly makes the reader feel all of the pain, suffering, and psychological trauma of every character. The writing is flawless and the story is spot-on in The Burning Air. If you are a fan of psychological thrillers, Erin Kelly has written another fabulous story that should not be missed. Four spiders for The Burning Air.

Posted by WebbWeaver at 12:18 PM No comments:

Book Review of EVEN VILLAINS FALL IN LOVE by: Liana Brooks 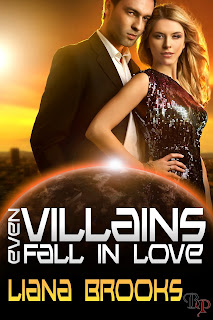 EVEN VILLAINS FALL IN LOVE was written by Lian Brooks and published by Breathless Press in 2012. You can purchase a copy at www.amazon.com You can learn more about this author by visiting her website at www.lianabrooks.com
I knew from the opening line that I was going to like this book! It’s a fast-paced, good-humoured delight from beginning to end. This is a fantasy romance with super villains and super heroes/heroines.
Dr. Charm is a super villain who must make the most difficult choice – world domination or the woman he loves AKA super heroine Zephyr Girl. Being a married duo isn’t easy, especially when your wife decides to go back to work and you have 4 little blessings, all of whom are showing signs of superpowers themselves!
But not all superheroes are what they appear to be. There is a traitor in the ranks and Zehyr Girl becomes embroiled in a nasty plan that could tear her family apart. But Dr. Charm, despite his retirement from super-villainous activities, seems to be the only one who can save the world this time. Will he succeed but lose the only woman he’s ever loved?
This is a light –hearted, easy read. It is fun and sexy without being graphic.
Definitely a 5-Spider read!

Jennie J. reviewer for WebbWeaver
Posted by WebbWeaver at 12:52 PM No comments:

Book Review of RULES of ENGAGEMENT by C. Michael Bennis 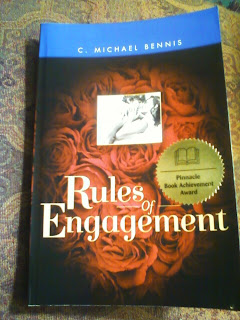 Rules Of Engagement was written by C. Miachael Bennis and published in 2009. You can purchase the book at www.amazon.com or visit the author's website at www.cmichaelbennis.com

Rules of Engagement takes you on a romantic roller coaster ride of love, betrayal, searching, longing and what is really like to find that one true love, lose it, and then return back to it years later. C. Michael Bennis puts together a good story line that keeps you turning the pages to see where this romance is going to lead, but even more than that his dialogue amongst the characters is very entertaining to say the least.


Alec Santana is an athlete and on his way to being a top ad man and bestselling author. Upon his college graduation he visits Europe as a present from his parents and runs into Nicole Bocart, the woman of his dreams. They spend days together, falling in love, but making a set of rules that will leave Alec feeling a void in his life for the following twenty years. Because Nicole hails from an aristocratic French family and is engaged to be married upon her arrival back to Paris.

Alec moves to New York upon his return back to the US and becomes a successful advertising executive but he drifts through relationships. He can't keep Nicole out of his mind, his only true love, and he carries her with him into every new relationship he gets involved in. He is haunted by this lost love and can't find love with anyone else although he gets involved in several relationships. He becomes a great writer and ad man but thoughts of Nicole continue to play through his mind.

Eventually the two reunite after 22 years of separation and the truth comes out about Nicole's life after their initial affair. Nicole is now the CEO of one the most powerful advertising companies in the world and she wants Alec back just as much as he wants her back. The two have a brief reunion and then separate again due to Nicole's husband trying to sabotage Alec's name and career.

Rules of Engagement is a very well orchestrated romance novel that keeps you wanting to turn the page for more. The best part about it, to me, were the lines of dialogue between the characters. Some of those lines are simply priceless. If I had to choose an area that the writing lacks it would be the visual aspect of it. Some of the places mentioned in the novel could have been more visually descriptive than they were, but other than that it is a great read. I'm a romantic and can't stand the corny romantic stuff that gets put out there and this is not that. If it kept my attention, which it did then C. Michael Bennis definitely did his job.

Romance, suspense, and a good flowing story, Rules of Engagement has all of those elements combined. The romantic scenes could have been more descriptive, not pornographic, but descriptive in a tasteful way. The dialogue was excellent and the characters were presented as they should have been, individual. With that said Rules of Engagement definitely deserves "4 Spiders."
Yarima K.
Posted by WebbWeaver at 10:39 AM No comments: