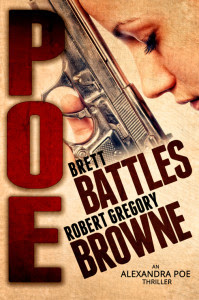 Tough-as-nails bounty hunter, Alexandra Poe has a good reason to take on a job for Stonewall International, an agency that hunts down and captures fugitives from justice. That good reason is a chance to find her father more than ten years after he disappeared from her life, abandoning her and her brother.

With her mother killed in a terrorist attach and her brother in a mental facility, Alex is desperate to find her father and to know why he left them. She accepts the mission to be inserted into one of the most notoriously brutal women’s prisons in the world in order to pull out another female fugitive with information the agency needs. The woman also has information Alex must have in order to find her father.

Joined by her bounty hunting side-kick, Deuce, and her ex-army compatriot, Cooper, Alex goes into full kick-ass mode to get the mark out of the prison before she can be taken out by opposing forces.

Battles and Browne have created a female protagonist who can out-fight and out-think the ‘baddies’ as well as any man, and can do it looking good. Alex Poe is beautiful, tough, and able to dispatch bad guys with all the flair of a female ‘James Bond’. This story will keep the reader on the razor edge for hours of tense, nail-biting excitement.

If you have read stories by Brett Battles or Robert Gregory Browne, in the past, you know these two are awesome writers in their own rite, but together they ratchet up the excitement with this new series and readers will be clambering for more hard-hitting Alexandra Poe adventures as soon as they read the last page. Don’t miss this electrifying new series by these two remarkable authors.

Five spiders for Battles and Browne and their newest creation, POE.

MENAGERIE was written by Rick Jones and published by Hive Collective in June, 2012, and can be purchased from www.amazon.com  You may find out more about the author at www.rickjonz.com

Rick Jones has once again taken a cue from the distant past and turned it into a modern-day adventure story for thriller lovers everywhere. MENAGERIE combines ancient archeological facts with unknown possibilities from beyond our universe to bring readers another Alyssa Moore/John Savage adventure that will keep them nail-biting and turning pages into the wee hours.

An earthquake has uncovered something strange two-thousand feet below the surface of the Gulf of Mexico, and John and Alyssa are tapped by the DOD to investigate and gather information. What they find is a remnant of an ‘ark’ from somewhere in outer space, filled with something dangerously unexpected; along with a new theory about the near-extinction level event that took place millions of years ago on the edge of the Yucatan Peninsula.

Now, with DOD mercenaries and predators of another kind on their trail, the two must find a way out or die a horrible death.

Jones’ writing moves smoothly along throughout the story, and the characters are talented and amusing, while still being flawed in a way that makes them more human. This story is taunt and exciting from beginning to end and will leave readers wondering what is really out there beyond our world.

5 Spiders for MENAGERIE and Rick Jones.

Posted by WebbWeaver at 5:39 PM No comments: