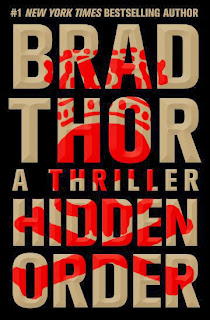 HIDDEN ORDER was written by Brad Thor and published through Atria/Emily Bestler Books in 2013. You may purchase this book at www.amazon.com and you can find out more about Brad Thor at www.bradthor.com

Brad Thor is thrilling readers again with his latest release, HIDDEN ORDER, but, this is not your typical Scot Harvath thriller… No indeed. In this new assignment, Scot is wearing a different hat… that of detective rather than Special Forces operative, and this fact may have many thinking that Harvath is considering slowing down a bit. In fact, there are a few passages in which Harvath considers ‘scaling back’ may be in his not-too-distant future, along with a possible switch to the corporate side of the famed Carlton Group.

After Carlton, Harvath, and several other top operatives in the Carlton Group are targeted for assassination, with several operatives being lost, the Group loses its primary Defense Department contract. This makes it necessary for them to take on any and all comers to re-coup their loses and get back in the game.

Enter Monroe Lewis, COO of the Federal Reserve, with a rather sticky situation. The head of the Reserve has died and the five contenders for his spot have been kidnapper, with one found murdered. Harvath is tasked with finding the other four before they too are killed.

This newest thriller from Thor will uncover the real truth about the Federal Reserve and its dealings, and educate the public as to the true nature of this, the most secretive organization in America. One which pretends to be part of the United States government, but with immeasurable power and non-accountability to the government or the people.

Mr. Thor has done his homework, uncovering a serpent in the garden of our government, and has penned a scenario that could easily come to pass. With his ever-flawless character development, story structure, and attention to detail, he has once again written a frightening and controversial novel, causing some sleepless nights for this reviewer.

Another great read from one of the writing masters of our time, Brad Thor’s HIDDEN ORDER is a stand-out, 5-spider novel worthy of everyone’s attention.

Posted by WebbWeaver at 10:57 AM No comments: