Book Review of FALL OF NIGHT by Jonathan Maberry 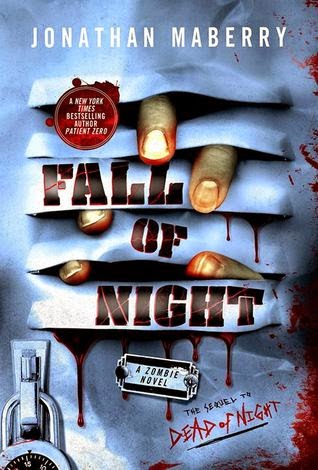 FALL OF NIGHT was written by Jonathan Maberry and published through St. Martin's Griffin in September, 2014. You may purchase this book at www.amazon.com and you can read more about Jonathan at www.jonathanmaberry.com

Jonathan Maberry’s newest release, FALL OF NIGHT, is the perfect sequel to his already best-selling DEAD OF NIGHT saga, Picking up the story right where it left off, Mayberry ushers in the next installment in a zombie apocalypse that will wipe out humanity.

When the inventor of Lucifer 113 goes missing, it’s believed that Patient Zero will never be discovered… until Patient Zero goes on a pre-conceived rampage, infecting victims outside Stebbins, Pennsylvania, and the believed containment area. Who is this Patient Zero, and what is his motivation for infecting the world with a man-made virus tweaked to turn the living into the walking, eating dead?

Jonathan Maberry’s characters are cutting-edge and true-to-life, trying to stay alive in the situations they are placed in. Some are likable and some, not so much, but all are typical and believable… just what you’d expect in small-town America. All doing their best to escape the effects of a terrible, rampaging disease that mutates the dead and re-animates them as monsters.

Maberry’s apocalyptic scenario is frightening to the tenth power and the ‘creep’ factor is off the charts. To say his vision of the future of mankind is too close for comfort is understating the obvious in this horrifying tale that just keeps on coming with hit after hit. Truly, a brilliant look into the all-too possible future of the human race.

If you are a fan of zombie tales, don’t miss this one from the Master. FALL OF NIGHT will satisfy your blood-lust for a long time, and will keep you up... listening for that bump.