Review of THE BLACK BIBLE OF JUAREZ by Steven Shrewsbury 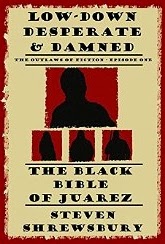 THE BLACK BIBLE OF JUAREZ was written by Steven Shrewsbury and published through Seventh Star Press in November, 2014. You may purchase this short-story at  www.amazon.com and you may read more about Shrewsbury at http://www.seventhstarpress.com/steven-shrewsbury


One-armed, aging Confederate war veteran, Joel Stuart is charged with retrieving the ancient and powerful, Black Bible of Juarez in this western-era, Lovecraftian adventure from Steven Shrewsbury. Joel encounters a wide variety of obstacles, in the form of bad guys, fast women, black magic, and the incarnation of an ancient, mind-sucking deity with enormous powers.

Written in the language of the era, the voice of Joel Stuart is uniquely Shrewsbury, and the authenticity of the character is particularly spot-on. Exceptionally cool... a story with something for any lover of rip-roaring, blood-and-guts western adventure. A gun-toting, knife-wielding, sword-swinging exploit from start to finish. Pick this one up!

Posted by WebbWeaver at 1:30 AM No comments: