How can an Upstate New Yorker write a story about Texas? A Texas Ranger to be exact. Well, let me tell you how.

I never stopped to think I couldn't.

As flippant and simple as the answer is, it's the gospel truth. I have always had a long-distance love affair with Texas. From a small boy I've been enamored with cowboys, the deadly desert, ruthless desperadoes, train and bank robbers, cattle rustling, and even the Dallas Cowboys football team. It all comes down to the star.

To me the Texas Rangers are similar to my other heroes. Some fictional some real ones. Whether they're honor-bound Samurais, Jedi's protecting the galaxy or military special ops performing clandestine missions in the name of protecting our country. (Yes, we could have a long talk about that one.)

Texas and the west was a dangerous outland where law was scares and might-makes-right was the way of the wild. That's where the Rangers and other stoic lawmen came in. Those iconic archetypes that inspired me as a youth and still do to this day.

I was a huge Lone Ranger fan. Watched John Wayne in the Green Berets a gazillion times and even recorded it on a portable tape deck so I could listen to it when it wasn't on one of only three channels back in the late 70's/early 80's.  I explored the history of the old west and became enamored with Wyatt Earp, Doc Holiday, the Gunfight at the O.K. Corral and all the mythology that it held.

As I grew older, those movies, characters were a constant companions in my creative psyche and never left me. Then came movies like Tombstone, TV shows like Deadwood, Justified , novel by Joe Lansdale, Tom Clancy, Jonathan Maberry, Joe McKinney, Elmore Leonard continued to fill that wild west, Gary Cooper-esque hero. You know the one that cuts a lean shadow in the noon-day sun and faces unsurmountable odds and goes out to face them anyway.

Yeah, that is the fertile ground where Texas Jay McCutcheon was born. While it may have been the muck-fields of Hell's ½ Acre and not the sprawling dust bowl of Texas, I do believe that this tough as nails, edgy Ranger is cut from the same cloth as the above-mentioned cowboy heroes.

All the characters in HEAVEN, HELL, or HOUSTON are deeply flawed people. But Jay McCutcheon's life is hanging by an unraveling thread that might just as well be on fire.

Being a Ranger is a family tradition in the McCutcheon family, and so is the nitro-glycerin filled, alcoholic-fueled temper that borders on the line of self-destructive.  Jay has a heart of gold but he's been running and fighting demons for so long, he's lost sight of friends and foes alike. But, he does have one saving grace:

His wife Inez and baby, Bellia. They're his last tether to sanity and chance at a happy life. I won't go into more detail as I really would want you to go order a copy and give it a read.

I truly believe I've captured the spirit of the west, of Texas.
That leads me back to this entire blog's premise. How can a guy who lives mere minutes away from Lake Ontario, hell, I'm practically Canadian, even attempt to tell the story of about an American historical institution like a Texas Ranger and the cowboy stereotype?

I just told the story of a guy who despite all his demons, was a good man and who just wanted to get home to his family. It was that simple. I filled the world with other characters that help explore the Ranger's personality and let the story handle itself.

I had a wonderful time exploring the world of Jay, Stacy Jo and Isandro. The zombies were a nice splash of color as well. But you all will find out more about that when the rest of the story is told in another book and another series.

Until then, thanks for reading and always remember to take a day off. 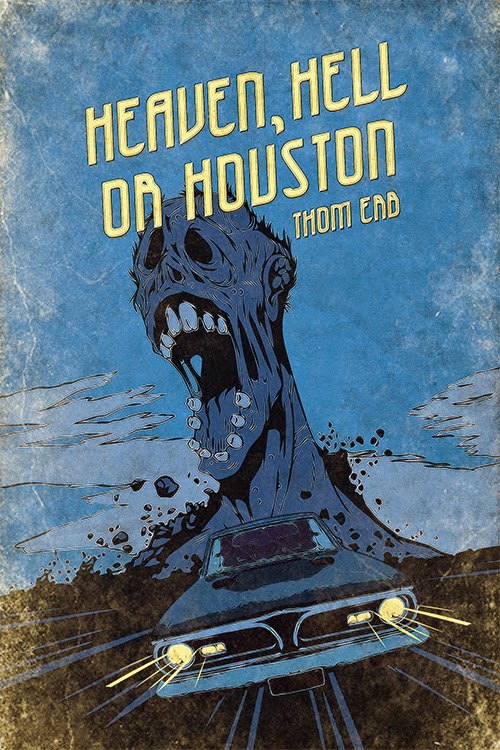 Just one more thing for Ranger Jay McCutcheon to deal with on his way back to Houston.

It's early summer 1985, and after a less than successful "easy" stint as the Governor's security detail, the volatile, alcoholic Texas Ranger Jay McCutcheon wants nothing more than to get home to his wife and baby and save his marriage. He thinks the only thing standing between him and his family is five hundred rain-soaked miles of dark pavement. But he's dead wrong.

Isandro Dianira has just broken out of prison. He's been possessed by an evil voice that has spoken to him since childhood. With his gang-banger thugs, he leaves a bloody trail on his way to Mexico. But before leaving the country, he needs to kill McCutcheon, the pig that put him in the pen.

As the two men unknowingly race toward each other, a powerful rainstorm is heading westward, and along with it, a zombie virus that's causing the dead to rise.

Stacy-Jo, a street-tough teenage girl from New York is about to get in some serious trouble, when she meets McCutcheon, who winds up saving her hide from a nasty situation.

Together, they hit the road and wind up at a roadside diner, where brutal violence will unfold and the undead will feed.

Thom Erb is a writer/editor, exploring all shades of darkness and light. He crafts tales that blur the lines of horror, noir, dark fantasy, thriller, weird western, noir and science fiction. Thom's works span the gap from middle-grades, Young Adult to Adult readers and taps into the theme of the reluctant hero in its many forms.

Thom has written several stories in short and long form and is now focused on novella/novel-length work.

Thom also holds a Master's degree in art education and is an artist/illustrator of murals and comic book/graphic novels. When not writing, Thom enjoys reading, quality films, television shows, role-playing games, playing drums, comic books and rooting for the Dallas Cowboys and New York Yankees. He lives in upstate New York with his wife Michelle. 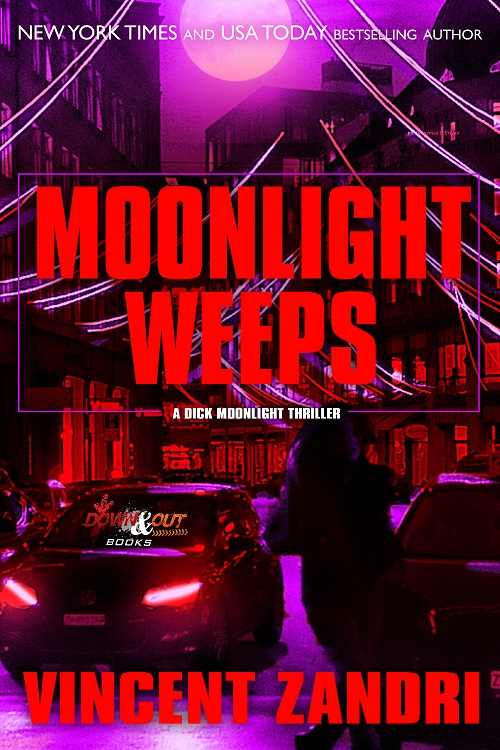 MOONLIGHT WEEPS was written by Vincent Zandri and published through Down & Out Books. You may purchase this book at www.amazon.com and you may read more about the author at http://www.vincentzandri.com

Dick Moonlight has a new client, and an old heartache in this newest installment of Vincent Zandri’s MOONLIGHT series. Moonlight is a private investigator with a bullet in his brain that threatens to end him at any minute. His new client is a brain surgeon, whose son is accused of ‘reckless murder’ in the suicide of a young woman… the daughter of a State Senator. But, the good doctor has secrets of his own, and Moonlight is left to his own devices as to how to clear the boy, while stopping the doctor’s devious and dangerous plans.

With an ‘Elvis’ impersonator for a sidekick, Russian Mafia bad guys, and double plays from all sides, Moonlight just wants to find the truth.

Zandri has hammered out another solid link in the ‘Moonlight’ chain and this one is the best yet. Characters that smack of authenticity, and a story line that will kick the reader’s backside with humor and bullets, this installment in Zandri’s series is thriller awesomeness. Stunning realism and full of action, “Moonlight Weeps” is a fantastic addition to the already acclaimed works of Vincent Zandri.
If you are a Dick Moonlight follower, you are in for a treat. 5 spiders for this action thriller.
And then there is Lola…

Posted by WebbWeaver at 12:30 PM No comments: