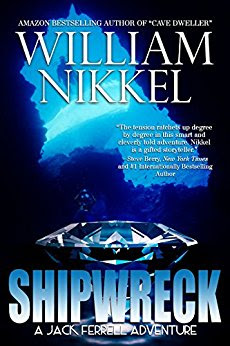 SHIPWRECK by William Nikkel is published through Suspense Publishing and is available at amazon.com

A dead man’s body is fished from the bay, a sunken yacht is discovered, a stolen necklace worth millions disappears, and oriental thugs are on the hunt… Jack Farrell is back, and at it again in William Nikkel’s newest action-adventure, SHIPWRECK.
True to form, Jack is in big trouble, along with his two best friends and the love of his life. After hooking a dead body on a fishing trip, Jack’s personal investigation soon reveals the man’s identity and last known location… a Japanese yacht that has mysteriously sunk in shallow water off the coast of Hawaii. Jack’s curiosity is again peaked when a woman claiming to be the dead man’s sister approaches him with a strange story of a plot to steal a world-famous, multi-million dollar gem, and who then, ends up murdered, almost on his doorstep. As Jack and company continue to dig into the case, more clues surface, but an underwater treasure hunt ends in death… a death that Jack Farrell intends to avenge at any cost.
William Nikkel has once again brought us to the edge with the latest installment in his Jack Farrell series. Nikkel’s characters are top-notch and just the kind of friends we all wish we had. Jack Farrell is intelligent, handsome, sexy, always up for adventure and intrigue, and Nikkel writes him with passion and gusto. Nikkel’s settings are his home turf of Hawaii and he knows them well, sending the reader off to lush jungles and sandy beaches, and descriptively showing us all how life in paradise isn’t always smooth sailing, and beautiful sunsets.
Another winning story, another Jack Farrell adventure that will intrigue and delight… don’t miss this one! 5 Spiders for William Nikkel’s SHIPWRECK! 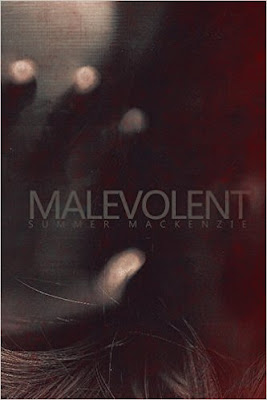 MALEVOLENT was written and self-published by Sam Tepes in November, 2015. It is available at www. amazon.com

When people begin disappearing without a trace, friends and families become suspicious about where they are and why they are missing. Dubious circumstances surround each missing person, and Bryan, the brother of one, is convinced that his sibling would never just leave without letting him know. He is certain that something terrible has happened to his brother, and sets out to find the truth. He locates a group of people who are also missing loved ones and asks to join them as they search for the missing. But the man they refer to as ‘The Hunter’, strikes an uneasy chord with Bryan. What happens next is a horror reader’s delight, with twists and turns galore, and just enough creep to satisfy.

Sam Tepes has penned a haunting story that will titillate your scenes and keep you reading non-stop to the end. This one is not too over-the-top, but has just enough scary to keep the reader entertained, while still making those little hairs on the back of the neck stand at attention.

Very entertaining, with just the right amount of gore, and totally believable characters, make this one a winner. 4 spiders, easily… Bravo to Sam Tepes and MALEVOLENT.

Posted by WebbWeaver at 10:52 AM No comments: